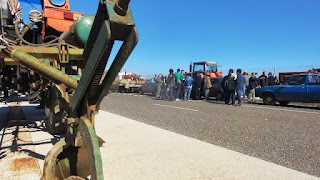 Dear compatriots and compatriots,
The REVOLUTION began and spread throughout the country.
Along with the revolution is declared, and the Î Î‘Î›Î›Î‘ÎªÎšÎ— DEFENSE.
FARMERS DON’T TAKE NO CONVERSATION. I’LL sell the fight and all of us who support you.
Attention will try to turn groups of workers against one another
You need a cool head and fight until you convince all to resign.
The REPUBLIC defeated and the ÎšÎŸÎœÎœÎ‘Î¤ÎŸÎšÎ¡Î‘Î¤Î™Î‘ and the TRANSACTION is over.
Two categories of Greeks there. The patriots of the Beauty of the Great and True and all the others. We have an obligation to save our Country and the values of
All Governments are unconstitutional, everything is a lie, our Home never lost its sovereignty, Politicians, judges, Bankers and the MEDIA have lost their freedom, were sold.
ATTENTION will be Î Î¡ÎŸÎ’ÎŸÎšÎ‘Î¤Î£Î™Î•Î£. Organized in rapid intervention teams, Î´Î¹Î±ÏƒÏ€Î±ÏÎµÎ¯Ï„Îµ per 50 meters in front of the concentration.
In the area of Monastiraki and Agios Panteleimonas, where there are many foreigners, you need to talk to them that this is not only for my films, it is for all of us. We as a People have shed plenty of blood in defence of our freedom, we have lost our own and when the secret services of Erdogan drown children in the Aegean sea, our souls ache.
Bring some edibles to have a treat our farmers.
Prepare banners with the names of the traitors. The Bastille falls.
Dear compatriots and compatriots,
The revolution has begun, with prominent shield of the Nation, the Monks of mount Athos and a number of Prelates who never feared the New World Order and they are always close to the farmers.
Many times I heard from the speakers of Î¼Ï€Î»ÏŒÎºÏ‰Î½ that “we are Fighting first for Greece”
If the police has closed the roads to the checkpoints, leave your cars and walk to meet them.
It is important to be present there. The roadblocks, let’s coordinate via mobile, and to make sure that they don’t creep into Trojan Horses.
Â· Please all the patriotic parties, movements, groups to support our farmers.
Â· It is the last hope of salvation of the Greeks, Hellenism and of humanity. Is the spark waiting for the Î¼Ï€Î¿Î»Î¹Î±ÏƒÎ¼Î­Î½Î¿Î¹.
Â· I strive to not pass the insurance. In the throes of “in favour of altars and fireplaces”. The Battle of Marathon was going to suffer in the event of rollover of the rotten our political system, because it will trigger rebellion in the whole of Europe.
Â· Greeks rise up-join and Î±ÏÎ¸ÎµÎ¯Ï„Îµ at the level of the circumstances.
With a protest meeting at the intersection of Mall of Paiania – Markopoulo and Koropi – Airport at 10.30 on Wednesday morning, beginning essentially, the action of the ÎœÎµÏƒÎ¿Î³ÎµÎ¯Ï„ÎµÏ‚ farmers.
The relevant decision was taken at a meeting of representatives of rural associations and cooperatives in the region, which was held in Athens on Tuesday afternoon.The design reports that more than 200 tractor will be found on that particular node, and according to the information of the notioanatolika.gr there will be open line with the major roadblocks of the rest of Greece in order to coordinate the closure of the roads as is the case in the rest of the country.
The same information of the notioanatolika.gr reported that the aim of the ÎœÎµÏƒÎ¿Î³ÎµÎ¹Ï„ÏŽÎ½ farmers are to remain at the point of not only the Wednesday and the Thursday and maybe the next few days just as you would “work” and the other blockades in the region.However, farmers do not intend to create tensions and conflicts with commuters in the area, and do not intend to go ahead and Î¼Î·Î±Î½Î¿ÎºÎ¯Î½Î·Ï„Î· course of the Attiki Odos.
The mobilization participate the vine products co-Operatives Spata and Paiania, the Agricultural Cooperative winery of Koropi, the Agricultural Cooperatives, Markopoulo, Keratea, Spata, Paiania, Kalyvia â€“ Saronic, the co-operative MARCO and the Î•ÎÎŸÎ‘Î‘.