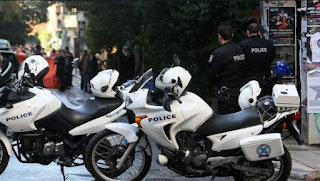 After the dimensions it took in the episode with the brown in Thessaloniki, the…
police officers of the DIAS was given through the web site at Facebook, its own response to the incident.
The cops are on their side emphasize that essentially they did their job, while their communication on page DIAS in Action on Facebook to respond to those who criticize.
You can read more details in their announcement:
“Last night in Thessaloniki, there was an episode that took a large area and found the opportunity for everyone to demonstrate (without cost) sensitivity.
In Aristotelous square, so there was a street vendor who sold chestnuts. There was a complaint that this was not licensed and was sent there a Group of DI.NES to check if this is the case. Finally the complaint had no basis. The paratype elderly citizen of us began ranting and raving, until after a while he passed out, and accepted the S-aid by the ambulance who called the police.
Today we are witnessing the indignation of many, not in that which violates the laws and the rules, but against those who have an obligation to impose upon them.
Well, let’s see some data:
1) The officers went there after a complaint from citizen. For those who don’t know this means that “charged” signal, and is accountable for the outcome of which we must justify in the daily report.
2) When they reached the spot they found obviously that the particular seller did not have the required permission. As they had an obligation informed him that we have to follow them to the station and that the illegal products have to be confiscated.
3) Then he, knowing that he will have penalties, started yelling in the first place (to crowd) and then he passed out, apparently from the stress of it.
4) The cops in spite of the reaction of the control (in accordance with the Criminal Code it is an offence), kept their nerve and they called the ambulance to provide medical assistance to whatever degree that was necessary.
So now all the Î±Ï…Ï„ÏŒÎ²Î¿Ï…Î»Î¿Î¹ judges criticize the cops because:
(a) were Involved.
They forget, however, that they had an obligation, because there was a complaint.
b) do Not deal with more serious crimes.
They forget, however, that the existence of a larger, perhaps offences, does not justify the smaller.
(c) there Were many… 7 police officers for a brown?
Forget, however, that in addition to the brown, there was around a total of world that (as has been done in the past) could turn into a mob, with unforeseen consequences.
The officer is required to impose the collective will of our people expressed through the legislative process of the representatives has been established. As has shown the Group BY.NES, the vast majority of police officers apply the law the SAME, in ANY DIRECTION, and to EVERY CITIZEN. Even when it has personal costs, such as in the case of the police which controlled the former minister. http://www.ereportaz.gr/kokkino-fanari-diarkias-stin-diki-…/.
The justice is that you HAVE to decide, and to show grace where it is needed and not the cop…”
Source