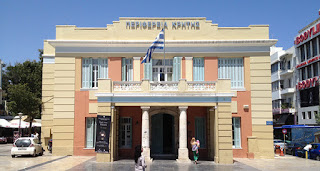 The Region of Crete awards Cretans Champions… Sunday 20 December 2015 and time 11:00 am.m. the Atlantis hotel, the room “Minos”, in Heraklion.
The Directorate of Social Welfare, in the context of Implementation of the Programme of Sports Culture 2015, will honor the athletes of Cretan origin, who have succeeded in National or International Distinction during the athletic period 2014-2015 and occupied the first, second and third place in their sport.
The event aims to cultivate the sports consciousness among our young people, to promote the “fair play”, to contribute to the fight against violence, to highlight the values and principles that govern the sport and in particular: respect, friendship, solidarity, but above all, to reward the athletes those who the effort was for our country a great price. Prizes will be awarded to athletes of the regional Governor of Crete Stavros Arnaoutakis, while the coordination of the event will the Executive Councillor for Sport, Nikos Î£Ï…ÏÎ¹Î³Ï‰Î½Î¬ÎºÎ·Ï‚.