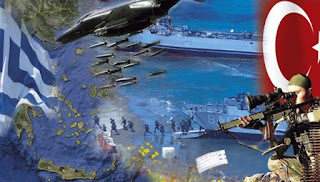 Written by Nektarios ÎšÎ±Ï„ÏƒÎ¹Î»Î¹ÏŽÏ„Î·Ï‚
Historian-Publisher
The re-emergence of Turkey in the Aegean sea…
the regime in Ankara is doing raids in the Aegean sea when warships and planes.Clearly and wants to export the crisis.East in the Aegean islands ,but the armed forces are on alert because they are afraid of a warm episode.
The aggression of Turkey due to the fact that the Greek diplomacy, threw the weight of the non-rescue of refugees in the neighbouring country and, moreover, blocked with Italy funds the development of the economy derived from the E.“Union