The president of Brazil thought that the mansion has ghosts,... 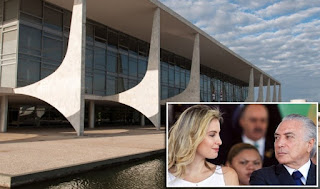 The president of Brazil Michel Î¤Î­Î¼ÎµÏ moved from the official presidential residence, and noted that he had…
“bad energy” and wondering if she had ghosts.
The 76 year old businessman Î¤Î­Î¼ÎµÏ, along with his wife, the 33-year-old former beauty queen Marcela and 7-year-old son Michelzinho left the Alvorada palace, in Brasilia, and settled in the housing provided for the vice president.
The president Î¤Î­Î¼ÎµÏ found the modern presidential residence chilling and the only one that really went well there was his son.
“I felt there’s something strange. From the first night I couldn’t sleep, the energy of the house was not good. The same feel and Marcela. Only in the Michelzinho liked the house, because he was running from one end to the other. We started to wonder up, and if there are ghosts,” said the journal hole cards.
The Alvorada palace bearing the signature of architect Oscar Niemeyer, and features among others a swimming pool, soccer field, chapel and clinic.
According to the brazilian newspaper Globo, Marcela invited me and a priest to perform a blessing and to banish any evil spirits but to no avail.
Eventually the family moved to a luxurious but smaller palace of Jaburu.