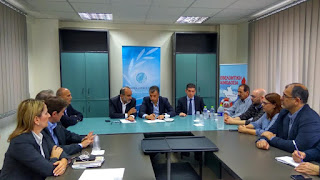 The burning issue of the highway of Patras â€“ Pyrgos raised by the Prefect of Western Greece Apostolos ÎšÎ±Ï„ÏƒÎ¹Ï†Î¬ÏÎ±Ï‚ to the head of the River Stavros Theodorakis, during the visit of the… second in the offices of the Region of Patras.
Continuing contacts with the heads of political parties, as has been decided by the Regional Council of Western Greece, the Of. ÎšÎ±Ï„ÏƒÎ¹Ï†Î¬ÏÎ±Ï‚ informed mr Theodorakis for the developments.
“The Patras â€“ Pyrgos is a project of vital and development importance for the Region of Western Greece. For us this is a very critical issue, is the completion of the Olympia Odos to the whole of the natural and technical object. We are determined to claim what they are entitled to our Region and our fellow citizens. We do not accept prevarication, shifts in time that they put in uncertainty the implementation of the project,” said the Governor, addressing himself to the head of the River.
And added mr. ÎšÎ±Ï„ÏƒÎ¹Ï†Î¬ÏÎ±Ï‚: “For us, Olympia Street without Ancient Olympia is not understood. You need to realize the political system that this route is of national importance and it is the credibility of the political system of the country because it has already passed by law in Parliament by the end of 2013.
From the side of Stavros Theodorakis noted that “the solution lies in the enhancement of the Region. The small and large projects that will help to get Greece out of the crisis. We are on the side of the world and the regional manager who has managed to rally all of society in this case. We are on the side of society to put an end to a long pending”.
The meeting was attended by the vice governor of Bc.E. Achaia Grigoris Alexopoulos, head of Regional Factions “Resistance of Citizens of Western Greece Vasilis Î§Î±Ï„Î¶Î·Î»Î¬Î¼Ï€ÏÎ¿Ï…, “Left Intervention anti-capitalist Movement in the Western Greece”, Katerina Î§Î±Î¼Î·Î»Î¬ÎºÎ·, “Ecological Western Greece” George ÎšÎ±Î½Î­Î»Î»Î·Ï‚, on behalf of the party of the “Western Confederacy” Gerasimos Paraskevopoulos and of the “Democratic Gathering of Western Greece” Konstantinos ÎšÎ¿Ï„ÏƒÎ¹Î»Î¹Î¬Î½Î¿Ï‚, the President of the Regional Council Anastasia Î¤Î¿Î³Î¹Î¿Ï€Î¿ÏÎ»Î¿Ï…, the vice governor of Regional Development and Entrepreneurship Costas ÎšÎ±ÏÏ€Î­Ï„Î±Ï‚, as well as strains of the River.
Today’s meeting was in continuation of the meetings that preceded the General Secretary of the COMMUNIST party of greece Dimitris Koutsoumpa, the president of the SOUTHWEST Kyriakos Mitsotakis, president of the PASOK – Democratic Alignment Fofi Gennimata, while we will follow with the rest of the political leaders, as well as with the prime minister. 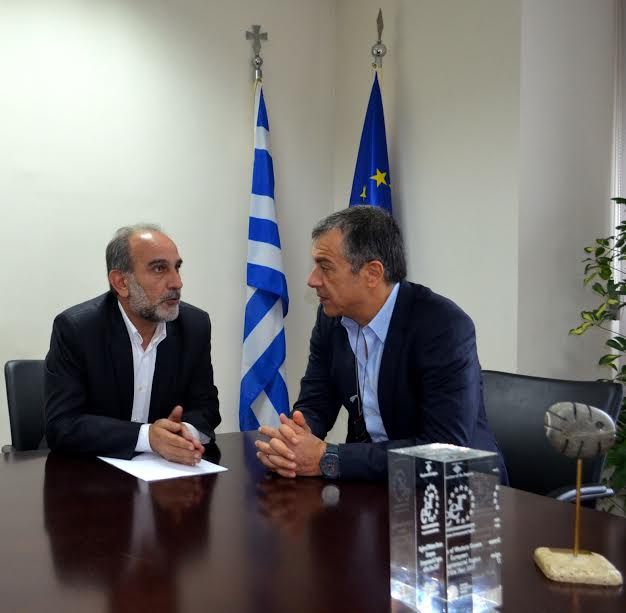