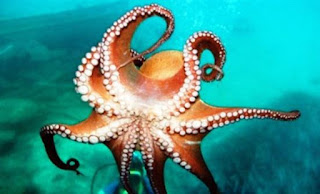 The octopus is one of the most versatile creatures in the animal kingdom, able to… navigate complex mazes, solve puzzles, and change color to match their environment.
Now, scientists have discovered that the octopus has another impressive ability, the ability to “see” through their skin.
Specifically, the researchers discovered that despite the fact that the popular cephalopods have large, highly sensitive eyes, they can detect light from their environment using molecules in the nerves of their skin.
The skin of marine animals are filled with light-sensitive proteins called Î¿ÏˆÎ¯Î½ÎµÏ‚, which are also found in their eyes. According to scientists, this fact perhaps lies behind the ability of the animal to rapidly change the color and texture of the skin so that it blends with the environment.
The photosensitive proteins send signals to pigmented organs in the skin called chromatophores, which expand and contract to change their appearance.
“This is a new way of detecting light that we didn’t know that they have the octopus. The skin can feel the light itself, for that octopuses don’t need eyes to detect light,” said Desmond Ramirez, head of the study at the University of California in Santa Barbara.
“The skin of the octopus does not detect the light with the same detail as the eyes and the brain, but can feel the change in light. Does not detect the contrast, but rather the brightness,” he added.