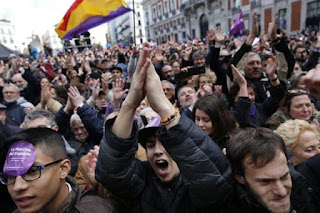 The results of the Ï€ÏÎ¿Ï‡Î¸ÎµÏƒÎ¹Î½ÏŽÎ½ national elections in Spain, it was… pretty much expected on the basis of the exit pollls. A relative disappointment brought the fact that the Podemos I finally managed to occupy the second position, which would have made them absolute regulators of the political developments in the country of the Iberian.
Although the political “earthquake” in Spain was not so big, the first step was taken by the Spanish people. The political establishment has lost enough forces, to the extent that we can say that the beginning of a new era for the political things in the country. The traditional parties that belong to the broader European political families of the people’s Right and the social Democrats, carriers of the neo-liberal agenda, they suffered heavy casualties.
However, the final results give the opportunity to the political establishment to form a coalition government. Despite the heavy losses, the Democratic Right of the coal ash spill in ranked first with 123 seats, and the Socialists came second with 90 seats.
Although all the opposition parties declared, before the elections, that they will not cooperate with the coal ash spill, the Socialists think it’s enough to form a government with 213 seats. A comfortable majority, since the minimum seats required to form government is 176.
Eventually, if you held such a scenario, Spain can be experienced one of the worst periods, as happened in Greece for the period 2011-2015. Coalitions of the corrupt political establishment with trunk the SW and PASOK, the Î´Î¿Ï„Î¿Î¯ prime ministers-puppets and the tougher neoliberal measures imposed by the European Financial Dictatorship in cooperation with the mafia of the IMF, were the main features of this period.
Source