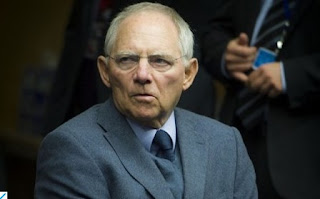 The disapproval of what was said during the interview on ERT Alexis Tsipras…
for the participation of the International Monetary Fund in the Greek program expressed by the German Finance minister Wolfgang SchÃ¤uble, with his statements after the meeting of Ecofin in Brussels.
The prime minister argued, speaking to the ERT, it is not necessary the participation of the IMF in the Greek program, a statement that the comment was made strongly by the German MEDIA, who comment on how the government wants to â€œget ridâ€ of the IMF.
Such statements â€œare not in the interest of Greeceâ€, commented the Finance minister of Germany, and called on Athens to show restraint in this discussion.
â€œThe pitcher can’t go to the well so often until it breaks. This is not for the good of the pitcher’s mound,â€ said Wolfgang Schaeuble, using a German proverb.
Î“ÎµÏÎ¿Î²Î±ÏƒÎ¯Î»Î·: Europe can and alone
In a statement about the reports of Wolfgang Schauble, the government’s representative Olga Î“ÎµÏÎ¿Î²Î±ÏƒÎ¯Î»Î· says:
“Fortunately, the German Finance Minister, is struggling to â€œkeep the pitcher strongâ€. The European public has no more understanding of what issues are serving each side. We recall that responsibility for the interests of the country is the Greek government. We expect from the German Ministry of Finance to separate the stand from the unacceptable tough stance of the IMF. Europe must and can solve the problems that concern it alone”.