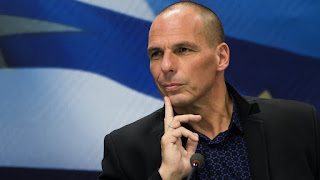 The announcement of the new pan-european party…
the former minister of Finance of Greece (C. Varoufakis will be in Berlin on 9 February of the same opposite the offices of the German finance minister Wolfgang Schaeuble!
This is a very smart and “noisy” political movement of a former politician who knows very well how important is the ÏƒÎ·Î¼ÎµÎ¹Î¿Î»Î¿Î³Î¹ÎºÎ­Ï‚ moves as this are forever imprinted in Ï…Ï€Î¿ÏƒÎµÎ¹Î½Î®Î´ÎµÎ¹Ï„Î¿ of the citizens.
This party will be pan-european and will participate in national elections in european states and, of course, in Greece, when they become.
As well as the communication between us and now less than a month, the next few days it will thicken and the leaks about the details of the character and organisation of the new party.
H move the C.Varoufakis wants to demonstrate two things:
That his party would start the “war” for the recovery of the EU and the european ideals in the “heart” of the “4th Reich”, Berlin. The capital of the country where it is considered Ï…Ï€Î¬Î¹Ï„Î¹Î± for that has happened in Europe, and from EU nations and citizens became EU numbers and nationals of”slave”.
And wants to highlight the fact that from the beginning starts the attack on the basic rate of disintegration of european societies and of the “tun” of the citizens and mainly of the “degassing” of the Greek society and the transformation of Greece into a “debt colony”, the German ministry of finance B.Schaeuble.
As for the new party has not been answered if it will be based on the internet or if you will have the ÎºÎ±Î»Î±ÏƒÎ¹ÎºÎ®-partisan organization. Of course, to be able to come down in all the european countries should already have ready-made networks of members and supporters
It remains to be seen if I participate in this and other personalities from Greece and other countries, and who in substance is the ideological orientation of the new party.
Together with the notice will be issued and the declaration of the former ministry of finance on the rollover of the existing economic model of Europe, as we all expect its going to be the alternative that will make the european societies from a “backwater” of austerity.
The project for the creation of a pan-european party that will participate in all the national elections of the countries-members of the EU, it is the first time that takes place, and only this is why it is unprecedented and innovative, but equally difficult, because each country will Î±Ï€Î¹Ï„Î·Î¸ÎµÎ¯ party apparatus, and the political message should be adapted to the local national needs.