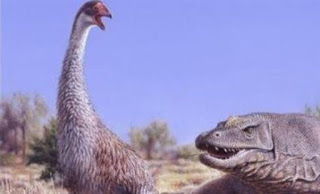 The mysterious disappearance of an ancient bird of Australia finds the solution… and, unfortunately, responsible), is like the man.
The interesting thing is that the bird is not gone because he chased down the man, but because it is not allowed to reproduce!
The bird
It is well known that in Australia there were many species of animals with special characteristics that were not present in other areas of the planet.
Many of them have disappeared before the advent of man on the continent, and some after that. One of these species was a large bird which could not fly.
Named Genyornis newtoni, the height reached three meters, and it was kind of akin to the ducks, geese and swans.
It has been found that the bird that disappeared before about 50-55 thousands without until today to have identified the cause.
The eggs
A team of researchers led by scientists at the University of Colorado in the U.S. they analyzed fossils of eggs of Genyornis and in combination with other findings have resulted in an interesting conclusion.
The first people arrived in Australia at the exact same period it is noted the disappearance of the bird. But until now had not been detected traces of extermination by humans.
But the new study suggests that people may not eliminate the birds were fed with the eggs, since the analysis of the fossil revealed that it was cooked.
The Genyornis was producing large eggs, the weight of which reached the 1.5 pounds. It was so an excellent source of food for the first inhabitants after the acquisition was simple, and without special risks.
The first residents didn’t have to suffer chasing the birds but just lurking before their nests and took the eggs.
According to the researchers, the first inhabitants of Australia baked in a fire the eggs then break the shells and eat the contents.
Serial Killers?
The study is published in the journal “Nature Communications” and, if finally confirmed the Genyornis will strengthen the view that the disappearance of a large part of the Australian fauna is directly linked to the man.
In Australia developed a unique fauna consisting of impressive in size and features species. Among these was a lizard with a length of 7.5 meters, carnivorous marsupial similar in size to that of the rhinoceros, giant kangaroos, etc.
It has been found that 85% of this fauna has disappeared after the advent of man on the continent.
Some scientists argue that the presence and action of man led to the extinction of all these species, while some say climate changes that have occurred over the contested time period.
Climatic changes that have not been able to adapt to most types of the continent with a result to disappear.