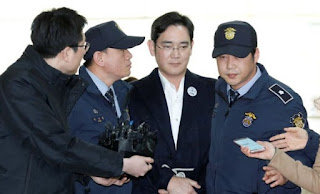 The magistrate was led today in handcuffs and tied up with white rope, the head of one of the largest business groups in the world…
of the Samsung Group, after spending the night in a small cell.
Jay Yong Lee was arrested last Friday for his alleged role in a corruption scandal that led to the indictment of president Park Gun-Hye.
The 48-year-old Lee is leading the giant technology company that is the largest in the world manufacturer spartphones, television with flat screen and memory chip.
Lee arrived at the office of the special prosecutor early in the morning, Greece time, clean-shaven and expressionless. He wore a dark suit and white shirt without a tie and came out of a van in the ministry of Justice, accompanied by officials.
The office of the special prosecutor accuses Lee that he bribed a close friend of the president in exchange for political favors related to the succession to the leadership of the group. Yesterday the d. a. announced that they will recite at the expense of the charges that include bribery, embezzlement, concealment of assets abroad and perjury.
Lee spent the night in the Detention Center of Seoul on the outskirts of the capital, in a small single cell, with the toilet in the corner behind a screen, as he describes the SUNDAY.
While the detention of Li is not expected to hinder the everyday operations of the companies of the Samsung group, which is run by professional managers, experts say that it can impede strategic decision-making in the larger business group of South Korea.