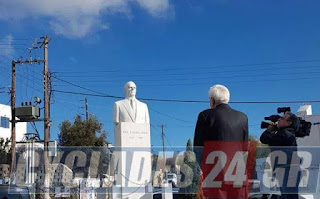 Departed this afternoon from the island of Mykonos, after…
first he became an honorary citizen of Mykonos, Prokopis Pavlopoulos, together with his Beatitude Archbishop of Athens and All Greece mr. Hieronymus.
Shortly before leaving for the Capital with a charter flight, the President of the Republic had a last wish, which has surprised everyone, as it was not scheduled and not included in the Protocol of the visit. As you know, mr Pavlopoulos was a close associate of mr. Karamanlis when he was in high state office.
The love of mr Pavlopoulos with the late Constantine Karamanlis was known, as well as of Constantine Karamanlis for the Greek island of Mykonos. According to exclusive information of the Cyclades24.gr, mr Pavlopoulos asked to visit the statue that is on the peripheral road of Mykonos town, paying tribute to the statue that adorns the Mykonos.
For a minute, mr. Prokopis Pavlopoulos, quite excited and committed he stood with gratitude across the street from the monument of Constantine Karamanlis.
It is worth noting that the President of the Republic accompanied to the airport by the Mayor of Mykonos mr. Konstantinos Koukas and the statesman of Cyclades, mr ÎœÎ¿Î½Î¿Î³Ï…Î¹Î¿Ï Catherine.
Source