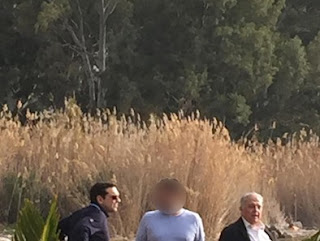 Moments of relaxation for Alexis Tsipras and his family… in a very well-known tavern of Aegina, on the wave…

As you will see in the photo that she sent us a regular of the restaurant, the prime minister is dressed very simply with a dark blue form, and enjoying the sun along with his partner Dove Baziana, while the company is the minister of state Alekos Î¦Î»Î±Î¼Ï€Î¿Ï…ÏÎ¬ÏÎ·Ï‚.

The prime minister, enjoy the view of the store, while he wore constantly on his jacket, and had beside him his son Orpheus Ernesto

Mr. Tsipras hasn’t stopped playing with his sons on the sandy beach of the tavern, and the only moments that interrupted the game was when we had to depart a little from the rest of us to talk on the phone…

It is worth noting that in addition to the k Î¦Î»Î±Î¼Ï€Î¿Ï…ÏÎ¬ÏÎ·, the tavern was and Paul Î Î¿Î»Î¬ÎºÎ·Ï‚ with a family of his own, at a different table, but soon became a company.