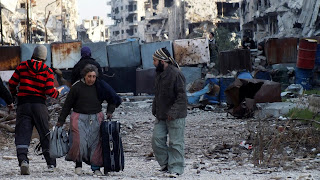 The extremist group Islamic State has claimed responsibility…
for the suicide attack that occurred earlier today in the city of Homs of Syria, which is under the control of government forces.
The jihadists in a notice posted on the Internet indicate that one of the fighters led them booby-trapped car into the checkpoint of the security services in the region Î–Î¬Ï‡ÏÎ±Î± and exploded, killing at least 30 people.
According to the official syrian news agency, SANA, 22 people were killed and more than 100 were injured in the attack.
Source