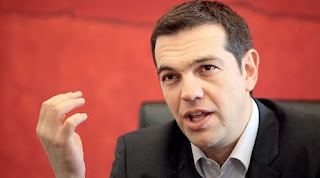 The German journal examines how…
found Europe in the current situation with the refugee
The German press highlights the urgent need to find common solutions to the front of the refugee crisis in the EU. References and comments are made for the World Economic Forum started today in Davos.
The intensification of the refugee crisis in Europe and the weakness of the EU and its member states to elaborate common solutions for the management of the problems arising have been put in question the european acquis. The seriousness of the situation tried to demonstrate yesterday, the president of the european Commission Jean-Claude Juncker and European Council president Donald Tusk, the calls for a need to find solutions soon in order to not collapse the Schengen zone,and what this entails. In an article entitled “the EU: a Ship without a captain,” the financial newspaper Handelsblatt commented that “half the time the refugee crisis was not enough to put in a lot of danger fundamental achievements of the EU: freedom of movement and the no border movement of goods in the european internal market”.
As pointed out in the German columnist, one may find responsible for this situation across the EU. “The Italian prime minister, Matteo Involved considers that three billion. euros to refugee camps in Turkey, it’s too much. The prime minister of Greece Alexis Tsipras is either not capable or not willing to protect the EU’s external borders to Turkey and to arrange there for the creation of correct reception centres (…) And in Berlin, the Christian democrats and social Democrats focus on the elections in three local parliaments in March, thus losing completely the Europe of their visual field”. The German newspaper, exercise fierce criticism in the EU and in particular the president of the European Council Donald Tusk, stressing that his duty is to mediate and to attempt to achieve compromises between the 28 member-states. As noted by the columnist, “in the February Summit the Tusk must finally show that he can lead and fulfill the duty of his office in Brussels”.
“Greece is threatened with a large accumulation of refugees”, observes response of the Badische Zeitung from Athens. As noted, “from the beginning of the year have arrived in Greece more than 30,000 refugees”. The publication relies on estimates of specialists, who think that by next spring, when it will prevail again in better weather conditions, the refugee flows will increase again. “By then the situation may become critical for Greece. As more and more european countries are starting to Ï€ÎµÏÎ¹Ï‡Î±ÏÎ±ÎºÏŽÎ½Î¿Î½Ï„Î±Î¹ across the stream of refugees”. The problem can only be solved in Turkey, the newspaper notes, citing statements by the deputy minister of Immigration Policy John ÎœÎ¿Ï…Î¶Î¬Î»Î±. Such as recalls and the Berliner Zeitung in the main article, “the issue of the refugee crisis, Turkey is the key country, said the Î†Î³ÎºÎµÎ»Î± Merkel when he went last October in Istanbul”.
Source