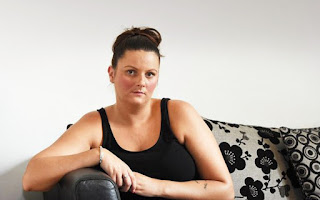 This heartbroken mother who is grieving the stillborn son five years ago, he learned almost by accident that the child of…
it was in fact a girl.
Stacey Lamb made a gravestone for her son, Daniel, and made his name tattoo on her hand when her child died in the womb at 20 weeks.
The 31Ï‡ÏÎ¿Î½Î· now reveals that by making a shocking blunder, the nurse that was then in the forced “birth” in 2011 had told her then that she had given birth to a stillborn son. Recently, however, he asked to see the medical records and learned that the child was the daughter, according to the Daily Record. Stacey had already faced a difficult situation when the people responsible for the incineration had scattered the ashes of her child without her permission.
The shock, however, when informed that she was carrying daughter was even bigger. All her world was turned upside down as it reveals itself.
“When I read the report of the autopsy, I was shocked. I was expecting to read “male” and when I saw “female fetus”, I just sat down and I was in a state of shock. I thought, “oh, my God, I had a little girl! What should I do now? Every time I think about it I cry. I don’t know what to do. Will I have to pay to get another headstone for my baby?” she said and added that the doctors told her husband the truth about the sex of the baby. The same, she thinks that maybe they wanted to protect her feelings if she believed that the baby is a boy.
The hospital in response to what he says, the mother reported that they usually say to the parents “the child” and not a boy or a girl because most of the times it is difficult to determine at this age. Nevertheless apologizes for the inconvenience to the family.