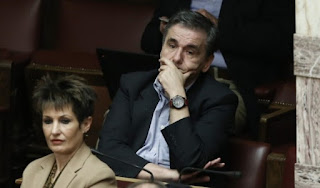 Mixed emotions it creates in the public mind the compromise in the Eurogroup between government and lenders…
As is apparent from the nationwide survey of Kappa Research, that presents “to vima” and was held on 22-23 February, the respondents declare that they feel “anxiety” and “anger” whereas the agreement is moving in the wrong direction.
The emotions are offset by the belief that opens the way for the closure of the assessment and removed the possibility of Grexit in 2017, something that creates “relief” and “hope”.
The majority is not a question of election (27% says yes to elections) and requests the government closure of the evaluation (61,5%). On the eve of the euro says ‘ yes ‘ 64.5% and a return to the drachma 27%.
Can 73% considers that the compensatory measures proposed by the government are moving in the right direction, rejects, however, the reduction of pensions 78%), the reduction in the tax-free (64,5%) and the increase in the threshold of collective dismissals (59%).
Read more in the “to vima”