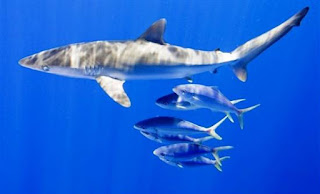 The fish are experiencing a phenomenon called “emotional fever,” which suggests that… have some degree of consciousness, according to a study by British and Spanish scientists.
This phenomenon manifests itself in the form of slight increases in body temperature of the fish, when exposed to stressful situations.
Researchers from the University of Bristol and the University of Stirling, in collaboration with the Autonomous University of Barcelona, observed that when a zebra fish species Danio rerio is experiencing stress, his body temperature increased by two to four degrees Celsius.
This is the first time that this “fever” is observed in fish, despite the fact that has been observed in birds, mammals and some species of reptiles. To learn the way it happens in fish, the researchers collected 72 fish and split it up into two groups of 36.
Then, the fish were placed in a large tank filled with water and interconnected apartments, which had different temperatures, from 18 to 35 degrees Celsius.
The fish of the control group were not subjected to changes of temperature and were disposed of in waters of 28 degrees Celsius. The second group was placed in a net and into the tank of 27 degrees Celsius, in order to simulate a stressful situation for the fish. After 15 minutes, the fish were released.
While the animals in the control group preferred to stay in apartments with a temperature of 28 degrees, those who were exposed to the stressful situation were transferred to areas of the tank with higher temperatures, causing an increase in the temperature of their body.
According to the researchers, this is an indication that the fish were experiencing a form of “emotional fever” associated with their condition.
“These findings are very interesting, as well as expressing for the first time that fish have some degree of consciousness,” said Sonia Ray, head of the study.
Some experts point out that animals are not capable of having a conscience, because of the simple structure of their brain, who do not have a cerebral cortex. The fish have a limited memory capacity and learning, while they can’t feel pain.
Other researchers argue that despite the small brain, have noticed similarities with structures in other vertebrates. These include the amygdala, which is associated with the emotions, and the hippocampus, which is associated with spatial memory and learning in mammals.