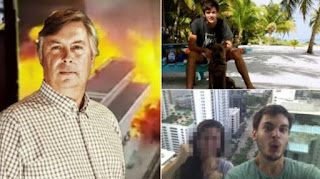 First of all, according to the story, the great businessman Apostolos Vakakis,…
also known as mr. Jumbo was for the death of his child, the 24-year-old C. Î’Î±ÎºÎ¬ÎºÎ·, and for the tragic accident watching the video on tv!
The video of the crash leaked to the tv almost 2 hours after the terrible accident that caused the death of 5 people has caused a lot of questions to the competent police authorities and ordered an investigation for the leak of the secrecy material from the cameras of the national highway!
Unfortunately, the fate of someone who is famous can get them so as to know how the child was killed before it even hit the phone from the police for the official update!
Unfortunately, in the case of the lord A. Î’Î±ÎºÎ¬ÎºÎ· this happened…
He saw the man first video on tv and on the internet to listen to the information for 2 children dead who were in fatal Porsche and after he was informed by the authorities.
As mentioned by a partner from the offices of the company jumbo of the lord Î’Î±ÎºÎ¬ÎºÎ·:
“Guys, the man lost the world under his feet. It is in a state of shock. He can’t believe what has happened. Hits his head on the wall that gave permission to take the child from the car and go to Delphi. A man full of energy, has virtually collapsed what else to tell you, we’re all overwhelmed,” she said, and continued: “And to tell you something else, George was a very modest child. Good and serious child without to be too pampered and riches as you write. He was living with a salary that the father gave him to finish his studies. All the other stuff that is written is bullshit…”
It is worth noting the reaction of the 41Ï‡ÏÎ¿Î½Î¿Ï… tragic father Î¥Ï€Î¬Ï„Î¹Î¿ Î Î±Ï„Î¼Î¬Î½Î¿Î³Î»Î¿Ï… where he lost in a horrible crash, a child and a woman and spoke at noon in a show of Zina Koutselini: