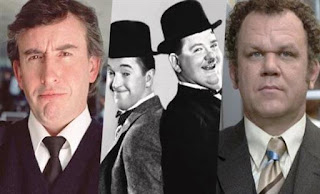 The story focuses on Laurel & Hardy, loved by all duet,… swoop down for a tour in Britain, having left behind them their golden period as kings of the Ï‡Î¿Î»Î¹Î³Î¿Ï…Î½Ï„Î¹Î±Î½Î®Ï‚ comedy, ready to face an uncertain future.
As they cross the country, the turnout of the audience is disappointingly small, but they don’t put it down.
Managing always to amuse each other, and as the visitors make them and the audience laughing, achieve reunification with legions of old fans and meet new ones.
The director will take John P. ÎœÏ€Î±Î¯ÏÎ½Ï„ (of unequal but pretty tense, “Corruption”, with James Mcavoy), while the script by Jeff Pope, academy award nominated screenwriter of “Philomena”, which said:
“When I see their movies, in my mind is always on a Saturday morning and I’m six years old, watching television at home, completely spellbound!” while added that he is aware of the huge responsibility, which involves an attempt to bring back one of those heroes.
The investigation of the Pope in the history of Laurel and Hardy, brought to the surface, according to him, a series of events, and details for which he had no idea, promising that the end result is, if anything, will be overflowing with obvious love for their childhood heroes.