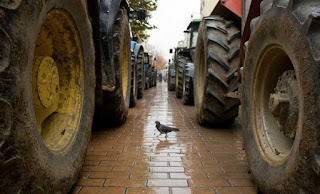 Their own message they want to send once again the farmers of Heraklion to the Government, following the postponement of the…
travel of the Minister for Rural Development Vangelis Apostolou on Crete.
The farmers of agricultural associations of Heraklion is about to assemble at 10 a.m. outside the offices of the OGA in Heraklion in order to protest against the heavy tax and insurance measures, that promotes the ministry responsible for the sector.
According to the farmers, who are already in a difficult economic situation, these measures will be the destruction of the rural world, as I will no longer be able to live their families.
In a statement issued for the current mobilization, they point out:
â€The Minister of Rural Development and Food, eventually I’ll be down in Heraklion, in accordance with the notice, at a scheduled visit to advertise the Program for Rural Development of the government, from which nothing have been waiting for the small and medium-sized and poor farmers.
The Rural Associations Asterousia, Heraklion, Archanes and nikos Kazantzakis, as well as the Committee for the Fight Farmers Arkalohori, we decided racing “slot” of the Minister, with a statement of our requests, we will carry out mobilisation of protest in the OGA, Thursday, 20 October at 10 am, against the tax-anti-insurance measures that break us, against the increases in levies decided on by the government SYRIZA-independent greeks, against a total in the Î±Î½Ï„Î¹Î±ÏƒÏ†Î±Î»Î¹ÏƒÏ„Î¹ÎºÏŒ law-guillotine, in coordination with the United Federation of Agricultural Associations of Chania.
EVERYONE IN the OFFICES OF the OGA, THURSDAY 20 OCTOBER AT 10 am
AGRICULTURAL ASSOCIATION Î‘Î£Î¤Î•Î¡ÎŸÎ¥Î£Î™Î©Î
AGRICULTURAL ASSOCIATION OF HERAKLION
AGRICULTURAL ASSOCIATION Î‘Î¡Î§Î‘ÎÎ©Î
AGRICULTURAL ASSOCIATION ÎšÎ‘Î–Î‘ÎÎ¤Î–Î‘ÎšÎ—
COMMISSION CAUSE FARMERS Î‘Î¡ÎšÎ‘Î›ÎŸÎ§Î©Î¡Î™ÎŸÎ¥â€.
Source