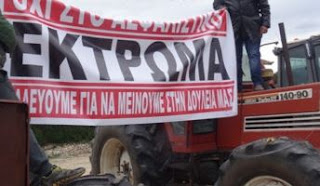 Has continued and today the great mobilization of the farmers in Argolis… they react to the new measures he wants to pass the government.
The farmers showed their opposition to the unacceptable measures trying to pass the government, in respect of the tax and the insurance and decided to march with tractors and agricultural cars in the centre of Argos, and then they set up a roadblock in the ÎšÎ¿Ï…Ï„ÏƒÎ¿Ï€ÏŒÎ´Î¹.
The rain did not deter the farmers to take to the streets and claim their rights and below you will see footage from their course, in Argos, the roadblock in the ÎšÎ¿Ï…Ï„ÏƒÎ¿Ï€ÏŒÎ´Î¹, as well as statements to the camera of the OBSERVER.
As we said, are determined to continue their demonstrations until they find the right and withdraw the government’s new measures affecting the agricultural sector.