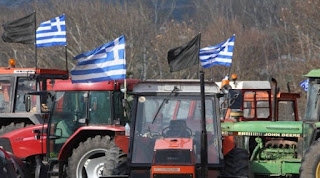 Tractors and farmers from the roadblock.
Nice ruled it out after 14:30 and for two hours the Tempi, protesting the policy of the government. A little after 13:00, the tractor started from Nice of Larissa, escort convoy.
The farmers participating in the roadblock implement the decisions of the panhellenic committee of the Î¼Ï€Î»ÏŒÎºÏ‰Î½ with today’s mobilization is in the context of the escalation of ÎºÎ¹Î½Î·Ï„Î¿Ï€Î¿Î¹Î®ÏƒÎµÏŽÎ½.
Farmers develop new roadblocks, while the intention is to better coordinate their movements as they say, calling for the creation of a common front with the participation of all Î¼Ï€Î»ÏŒÎºÏ‰Î½ located in different parts of Greece.
In this context, the next Tuesday, 7/2, at 12 noon, the farmers move on to new meeting of the Nationwide Committee ÎœÏ€Î»ÏŒÎºÏ‰Î½ Greece in Nice.
In a statement, the president of the United Federation of Agricultural Associations of Larissa, Rizos Maroudas, stressed: “Stepping up today, with the exclusion of the valley, as a lever to pressure the government, and enhancement of our problems. It is a just fight, which we continue here today. Also we call on the Tuesday in Nice, all the roadblocks, regardless if you agree with the framework of the nationwide committee of the Î¼Ï€Î»ÏŒÎºÏ‰Î½ to coordinate the next steps.
To a question on, whether the farmers will request a meeting with the prime minister, mr. Maroudas said this will be decided next Tuesday in a nationwide meeting.
In addition, Kostas Î¤Î¶Î­Î»Î±Ï‚, a member of the steering committee, said: “we Ask the government to bend over, really over our problems, because farmers no longer have the ability to cultivate the land”. She pointed out that the farmers will continue their fight and step up.
It should be noted that it remains the central roadblock to the node of Nice, with the farmers to exclude indefinitely the power of the national road to Athens.
Also, closed the National Road Athens – Thessaloniki, and the current to Thessaloniki at the junction of the Î Î»Î±Ï„Ï…ÎºÎ¬Î¼Ï€Î¿Ï… from farmers who are at the point of Manufacture.