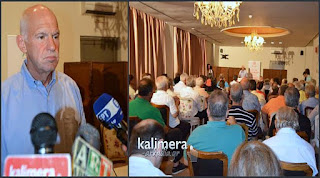 Arcadia, visited on Tuesday, the former prime Minister and President of Movement of Democrats Socialists, Giorgos Papandreou….
Initially, he went to the Megalopolis, which has been affected by the natural disaster, and then came to Tripoli.
Shortly before the meeting with executives of the ÎšÎ¹Î·Î½Î·Î¼Î±Ï„Î¿Ï‚, mr Papandreou made statements to the MEDIA and spoke of the need to have a national, progressive plan of radical changes for the country. A plan that will transform Greece from a parasitic, in a productive economy.
Also, he stressed that everything he was in favour of proportional representation and in favour of the so-called “German electoral system”.
For the referendum: “If there was a national Ï€Î±Î½ÏƒÏ„ÏÎ±Ï„Î¹Î¬, as I had requested in 2009-2010, if there had been a referendum in 2011 in a climate of consensus, we have now gone from the memoranda, as they left Cyprus, Portugal and Ireland”.
For the occurrence of the disaster in Arcadia: “An unprecedented natural disaster. The dimensions are devastating. Certainly the State must contribute to the recovery of damages and have to rush the problems that exist in the ELGA, to be close to the people of the region. In a national plan, we create, we need to see that with climate change, to prepare ourselves for similar situations, but there is a policy that protects people, property and crops. In Arcadia, they were not destroyed just this year’s crops, but we’ve had disasters that will create a problem for many years, many growers”.
Source