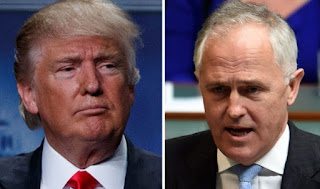 The less…
episodic – indulgent characterization – can be characterized as the telephone contact that they had Donald Trump and the Australian prime minister, Malcolm Turnbull.
The issue of the agreement on the refugees was the fuse to fire up the spirits and the Trump, in accordance with information of the Washington Post, attacked the Turnbull bragging about the extent of the electoral victory. And while the call was going to last an hour, in 25 the Trump ended abruptly at the contact of the two leaders.
At some point the American president informed the Australian prime minister that he had talked with four leaders of that day (on 28 January)- among them and Russian president Vladimir Putin – and that between the phone call “was by far the worst”.
In terms of the agreement, the two countries that provides for the US to get to 1,250 refugees from australian detention centres, the Trump said it was “the worst agreement ever made”. Complained that that the “kill” political and accused the Australia that he wanted to “extract the next bombers of Boston”.
The Trump returned to the issue through his beloved road, of the Twitter, writing, “do you believe? The Obama administration has agreed to take thousands of illegal immigrants from Australia. Why? I will study this stupid deal.”
American officials say that Trump had shown similar behavior, and with other leaders such as Mexico. But the attitude of the Turnbull was unexpected and due to the close link between the USA and Australia, working in the field of information, support and diplomacy, and have worked in wars such as in Iraq and Afghanistan.
A senior official admitted that the conversation Trump – Turnbull was “hostile and emotional” but pointed out that most of the conversations Trump with foreign leaders – such as Japan, Germany, France and Russia – and all of them were productive and pleasant.
The agreement provoked the wrath of Trump provides for the U.S. to get to 1,250 refugees from australian detention centres, where conditions of living have caused the intervention of the UN. Many of the refugees and immigrants coming from Iran, Iraq, Sudan and Somalia, countries which has included in the decree of prohibition of entry to the Trump. According to Reuters, Australia will take care of the resettlement of refugees from el Salvador, Guatemala and Honduras.
“I don’t want these people” reportedly told the American president raising a number of occasions the number of refugees referred to in the agreement in 2000 instead of 1.250. Turnbull said that in compliance with the agreement, the united states does not have to accept all refugees, but to allow them to go through the laid down procedures. In this the Trump replied that every one will go from “procedures for scrutiny”.
The scepticism of the Trump was due to the fact that I don’t see a specific benefit to the U.S. if you abide by the agreement.
According to the Washington Post, the Trump called the Turnbull from the Oval Office Sunday afternoon.
When the Australian prime minister has suggested to leave the “dead end” in the issue of the refugees and to discuss the situation in Syria and other foreign policy issues, the Trump was reluctant and completed the call 35 minutes before the specified expiry.
The same Turnbull, however, kept a very low profile for the phone call. “These discussions are sincere and private. If you see a story about them I will not add something,” he said at a Press conference.