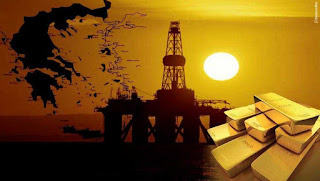 Critical for the future plans of the company, the visit of the CEO in Athens next week…
Clear answers for all of the pending matters concerning the investment plan of the company Eldorado Gold in Greece is expected to ask the CEO of the company Paul Wright’s visit to Athens.
The head of the canadian multinational, next week will be located in our country and has already called for a meeting by the minister of Energy and Environment, Panos Skourletis, as the prime minister, Alexis Tsipras, without be so far response.
Wright is expected to announce, possibly through a Press conference, the change in the policy of the Eldorado Gold in Greece, as well as the attitude of the government has seriously shaken confidence. While it is expected to give the Greek government a deadline of three months for the resolution of all outstanding issues associated with the authorisation of the investment programme.
The investment program of the Eldorado in the mines of Halkidiki, close to eur 1.5 billion. euros, of which it has already spent an amount of eur 650 million. euro. From 2012 to today have been attributed to over 50 million. euros in taxes and social insurance contributions, and has ensured employment to more than 2,000 employees along with the construction work. In the full development of the investment plan of the Eldorado is expected to generate in the region of 5,000 direct and indirect jobs.
The patience of Eldorado appear to be exhausted as well, despite the issuance of a series of decisions of the Coe that the justify, the Greek authorities continue to put obstacles in the implementation of the investment plan.
Source