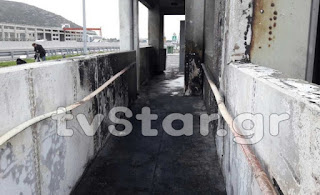 The investigations for the reasons that led to the tragic accident that occurred the afternoon of…
Sunday on the national road near Thebes and claimed the lives of 4 people continue.
Today at the point of rolling, which has shocked the whole country, was the well-known expert Panagiotis ÎœÎ±Î´Î¹Î¬Ï‚ , who was speaking at the STAR Central Greece, stressed that the driver of the Porsche began to lose control of the vehicle 130 meters before the collision.
Referring to the speed of the luxury car indicates that ranging from 180 to 200 miles.

THE E. ÎœÎ±Î´Î¹Î¬Ï‚ to the point of tragedy in the Thebes of LAMIASTARGR
Source