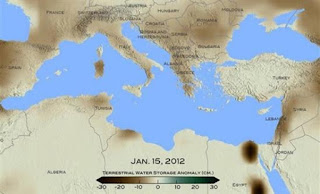 The drought that began in the eastern Mediterranean in 1998 and created the conditions for the start of the devastating civil war in Syria, it was the worst case of climate change in the last 900 years, according to a study by NASA.
The scientists analyzed the history of drought, by examining records from rings tree trunk that show the annual precipitation from 1100 until today.
The affected area includes countries in Southern Europe and North Africa, and mainly in the Middle East.
“The size and significance of anthropogenic climate change requires us to really understand the full range of natural variability of the climate,” said Ben Cook, NASA.
“If you look at the recent events and begin to see anomalies that are outside the range of natural variability, then we can say with some certainty that this particular event or this series of events caused by humans,” he added.
The drought in the region between 1998 and 2012 lasted longer than usual and it was 50% drier than the driest period in the last 500 years, as well as 10% to 20% drier than the worst drought of the 1100.
The drought, which is caused by temperature increase, can lead to great disruption in food production and conflicts over water resources. The lack of water and population growth are two factors that are expected to cause and other conflicts and humanitarian crises in the coming years. The recent syrian civil war can be partly attributed to the drought between 2007 and 2010, according to several studies.
The drought has resulted in widespread failure of crops, leaving thousands of families in rural areas with economic problems. It is estimated that about 1.5 million people from rural areas moved to urban centres in search of work.
The lack of adequate government response to drought and the displacement of the inhabitants were the events that led to conflicts within the government and among the social, political and religious groups, resulting in the devastating civil war and a large refugee wave.