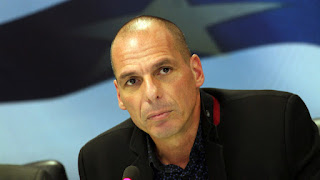 “He’s the worst politician…
I have ever met,” says the Î–Î¯Î³ÎºÎ¼Î±Ï Gabriel
“The Championships don’t even want to shake my hand,” says in an interview in the German magazine “Stern”, the former Finance minister, Yanis Varoufakis.
If he himself, as he says, has always had respect for the German counterpart, the Greek politician admits that the Association had to show his distaste. In an interview, Yanis Varoufakis also objects to his political opponents and the MEDIA saying: “there is No doubt, I was a victim. There has been a campaign of character assassination”.
“With regard to the eurozone crisis and the path of reform has been between us a tough match,” he pointed out Yanis Varoufakis about his relationship with Schaeuble in the German magazine.
“Wolfgang didn’t even want to shake my hand.” The Greek politician has explained to the German magazine that he has always respected the German Finance minister.
“In the end”, as you pointed out, we were like two boxers, who were giving blows to each other, and then we felt closer to each other”.
In an interview, Yanis Varoufakis also praised the policy of the German chancellor with regard to the refugee crisis.
As he emphasises, the policy of Angela Merkel impressed him. And while his mouth is dripping honey for the iron lady of Germany, the vice chancellor of the country, minister of Economy and leader of the social Democrats, Î–Î¯Î³ÎºÎ¼Î±Ï Gabriel, dripping poison.
“He’s the worst politician I have ever met,” according to the Greek politician.
Source