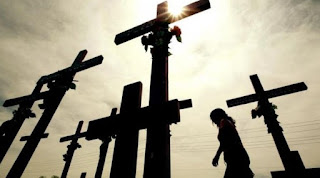 This is the city…
which had been acquired between 2008 and 2011, the utterly enviable title of “world capital of homicide”. The reason for the city of Mexico, Ciudad JuÃ¡rez.
Murder rates began to fall from 2012, however, the high rates of violence have long-term psychological effects on the residents, especially the young ones, such as transmitting Irene Caselli on behalf of the BBC.
Located on the border with the united states and due to its location, is the largest center of smuggling and drug trafficking in Mexico. The local cartel, which is estimated to be of the largest criminal organizations in the world, it distributes 50% of the drug to the united states.
Luis Mercado was just 16 years old when he experienced for the first time a panic attack.
It happened during recess at school. He felt the need to run away and hide, he found refuge in the school toilets and there began to cut with a sharp object himself. A practice that became rampant habit, until he experienced a second crisis of anxiety.
His family, like hundreds of others, has been directly affected by the violence of the cartels that are responsible for over 10,000 murders, in the years 2008-2011. Luis from very young, he had become a witness and other violent incidents: he Was 11 years old when his mother murdered his father… One night, five years ago, Luis had attempted to put an end to his life, but he couldn’t. “Sometimes I wonder why I continue though I feel so scared. I wonder why I didn’t do it”.
Luis is part of an ever-increasing number of residents of Ciudad Juarez, who have tried to take his life. One in four locals has attempted, and one in ten has done so, according to a study of the Family Center for Integration and Development (UACJ). Young people, aged 15 to 29, are the ones that go in the Î±Ï€Î¿Î½ÎµÎ½Î¿Î·Î¼Î­Î½Î¿ approach, however, testify to the numbers of statistics.
“There is the feeling that life has the same value as before,” says the professor of psychology Oscar Armando Esparza Del Villar. “When you live in a society with this culture, where life has no meaning, suicide may seem like one of the options for those who have symptoms of depression or problems in their lives”.