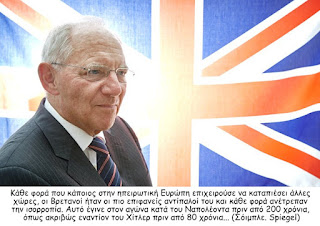 Despite the political agreement of 24 May, the release of the first Ï…Ï€Î¿Î´ÏŒÏƒÎ·Ï‚ is expected to be decided at the eurogoup of 16 June and…
the rest of the Ï…Ï€Î¿Î´ÏŒÏƒÎµÎ¹Ï‚ will be disbursed until 31 October under the condition that by then we will have implemented dozens of outstanding prerequisites, which would increase the political cost for the government â€“ has already been important in the polls.
So, the final decision for the disbursement of the first Ï…Ï€Î¿Î´ÏŒÏƒÎ·Ï‚ will know on 16 June, as well as if this happens before or after the referendum of the British people to stay or exit(Brexit) from the European Union(EU).
For the Greek issue, from a political point of view and from all sides, within and outside the country, “played by the delays”. The possibility of Brexit may be a milestone a fee for this game or at least the rules by which it was played. A Brexit, which is proposed sagging in the polls as the dominant scenario, will grow up challenging the Î³ÎµÏÎ¼Î±Î½Î¿ÎµÏ…ÏÏ‰Ï€Î±ÏŠÎºÏŒ model, which dominates in the EU, the eurozone and our country. After a Brexit euroscepticism and euro-centrifugal forces will increase and the political upheavals will be inevitable.
No one can predict the attitude of Germany, but the declaration of SchÃ¤uble in Spiegel that even a low prevalence of the british to vote to stay would have been a warning about how the Europeans have managed, until now, the issue of integration shows that the next day will not be same with the previous in Europe â€“ with most likely the most centralized political and economic scenarios.
In such a context the left-wing SYRIZA, which, as we wrote last year, was killed early in the German way of austerity, will not have the time to complete any particular “social democratic” or “liberal” transformation. With the opportunism that distinguishes him will attempt to be redefined in the new conditions, closer to the radical roots, even if he has burned every paper of progressivity on the altar of ÎµÎ¾Î¿Ï…ÏƒÎ¹Î¿Î»Î±Î³Î½ÎµÎ¯Î±Ï‚. I don’t think he’ll make it.
On the contrary, I believe that a brexit in combination with a powerful result of a dispute in the Spanish elections will be free and will ÏƒÏ…ÏƒÏ„ÏÎ±Ï„ÎµÏÏƒÎµÎ¹ healthily in our thinking and economic acting forces in our place for a alternative to hitherto blind europeanism that is no more than an obsessive Î³ÎµÏÎ¼Î±Î½Î¹ÏƒÎ¼ÏŒÏ‚, which destroys the economy of the country and mortgaging our children’s future.
The alternative today may not be sought against the PARTY, but against SYRIZA has failed to cope with and to manage. Opposite to the previous applied passively and SYRIZA the proceeded with zero political ethos and dazzled by the light of power.
The way out is not only the mixture of the policy. The way out includes the crash of the customer state and the end of austerity. There is today no party or movement that can serve the first while at the same time, the German way, who faithfully serve those who ruled and rule, cancels the second. The object of the alternative is that we will be able in a sustainable way to get away from this deadly combination.
The referendum in Britain it seems that it will accelerate political developments and social awareness in Europe and Greece.
The Schaeuble said in the interview: “Every time someone in mainland Europe to attempt to suppress other countries, the British were the most prominent opponents, and each time have defeated the balance. This was done in the struggle against Napoleon 200 years ago, just like against Hitler 80 years ago” and stressed that Britain is a “leading nation”.
Himself, entering the eurogroup meeting of 24 May, had stated that the Greek debt will decide the German politicians who have been elected in the elections of 2017, filling it with meaning: “how it works in a democracy”.
Really, who addressed the Association on “democracy,” if not to the Greeks, and the Greek government, and yes, ironically since he knows that democracy has been abolished in our country through the implementation of memoranda of understanding and with the main own responsibility?
Really, who is British tries to suck the Schaeuble on the “leading nation” when, exactly, on the contrary, the european integration, as he means by and in the name of which invites them to remain, leads to the question of the national sovereignty of the member-states?
From the polls it seems that most Brits turn their back on the German Europe, claiming one of their own way in the globalised economy, the safety, well-being and development. We?
Source