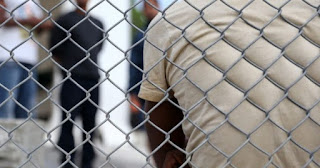 Contrary to the Greek Constitution and the…
community law is the “containment” of refugees in the islands of the eastern Aegean sea, in accordance with finding of the Bar Association of Chios, which was filed today in the morning the mayor of Chios, Manolis Î’Î¿Ï…ÏÎ½Î¿Ï.
The 16ÏƒÎ­Î»Î¹Î´Î¿ finding was published in today at noon from the municipality of Chios. So I worked an eight-member team of lawyers from Chios, after the order of the municipal council, which submitted the question “if the basis of this joint statement the EU and Turkey, refugees and irregular migrants can be moved from the Greek islands of the Aegean to the rest of Greece”.
This finding indicated that “the Agreement of 18 March 2016 between the European Union and Turkey does not expressly provide for the obligation of residence for refugees-immigrants in the Greek islands up to examine the application for asylum. The obligation of residence for refugees-immigrants is a product of interpretation. This interpretation as applied until today, however, is contrary to both the Greek Constitution and the European Convention on Human Rights (ECHR). Therefore, the refugees-migrants, who enter through the Greek islands in Greece can be moved to the rest of Greece to examine the asylum application.”
In accordance with everything that transmits the Athenian Agency, the text of the finding of the Bar Association of Chios, the agreement between the European Union and Turkey is best described as a political agreement, which legally bears the characteristics of the “Gentleman’s Agreement (gentlemen’s agreement)”, of which the legal analysis is based on international and humanitarian law, but also in the law on the procedure for granting asylum and humanitarian protection in Greece.
As noted, “the practice of caging of immigrants in the islands “is largely a political and strategic decision, in order to prevent large flows, using the islands as a geophysical boundary within which trapped the refugees and irregular migrants for an unknown period of time, thus creating the reluctance and all the others who wish to enter the EU to follow this route”.
The Bar Association of Chios, among other things, highlights:
“… nowhere is there mention of the reason or the justification of the restriction of movement, the maximum period of restriction of movement and of any right of appeal against restriction of movement”.
“… anywhere and in any law, there is no obligation of the host state completes the process for asylum at the borders.
Hence, with this provision may circumvent the possible obligation to stay in the Greek islands-borders, refugees, immigrants, asylum seekers and even for the 28 days provided for in the law.
Characteristic is also the legislative provision of article 10 of the same law, on the basis of which Reception Centers and Identification can be established, both in border areas (para. 1), as in the mainland (para. 3). A similar provision does not exist for the open hosting structures and by the omission of this in combination with all the above mentioned it becomes clear that these Structures can operate, both in border areas and in the hinterland”.
Important is to mention that the Bar Association of Chios on the restriction of the freedom of movement of asylum seekers since, as he notes, this “can be done only by a decision of the governments of the member states, which have the discretion to determine the place or region of the country where traffic is allowed, which may be different from the place of arrival”. “However, such decision does not exist in this case and a similar restriction of movement of migrants in the Greek islands has not been made, either by decision of the government (ministerial decision etc.), nor with a law, which has been passed by the Greek Parliament. To be noted, that nowhere in any law there is no obligation of the host state completes the process for asylum at the borders,” he adds.
Speaking to the Athens and Macedonian News Agency, the mayor of Chios, thanked the Bar Association, noted that “the findings will be given to study the aldermen. Directly, we move forward on this issue of concern to the rangers islanders”.