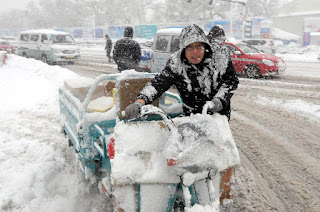 Faced with unprecedented cold wave…
is China, with snowfall even in the southern regions, which led to the cancellation of many airline routes.The National Meteorological Center (NMC) has declared
“orange alert” across the country. The mercury is expected to drop to -39 degrees Celsius in the ÎœÏŒÏ‡Îµ, in the province of Î§ÎµÏŠÎ»Î¿Î½Ï„Î¶Î¹Î¬Î½Î³Îº bordered by Siberia in -41 degrees in the Î“ÎºÎ­Î½Ï‡Îµ of Inner Mongolia.
Meteorologists believe that this Weekend will dispel a lot of record cold that can withstand for many decades. In two-thirds of the country the temperature will fall below -12 degrees Celsius.
In the city Î¤ÏƒÎ¿Î½Î³ÎºÏ„ÏƒÎ¯Î½Î³Îº of southwestern China it snowed for the first time after 20 years. By noon they had cancelled 118 flights, whereas the other 195 were made with a significant delay.
In south China, the snowfall is expected to be contained by Sunday.
In Beijing, despite the cold, there was sunshine today. Early in the morning the thermometers in the capital were still showing and -17 degrees and in a mountainous zone, on the periphery of the city, the mercury fell to -29,8 degrees.
Even the tropical island Hainan, with the sandy beaches and palm trees, was not spared from freezing. In Haikou, the provincial capital, the temperature at noon was 6 degrees while the normal for the season is 13 degrees.
In accordance with the public television, the temperatures will return to normal for the season from the Third to the north and by the end of next week in the south of the country.
Source