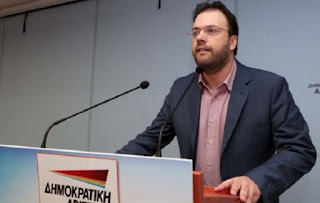 Excerpts of the interview by Thanassis Î˜ÎµÎ¿Ï‡Î±ÏÏŒÏ€Î¿Ï…Î»Î¿Ï… in a SERIES of…
The President of DIMAR, and Parliamentary Spokesman of the Democratic Î£Ï…Î¼Ï€Î±ÏÎ¬Ï„Î±Î¾Î·Ï‚ Thanasis Î˜ÎµÎ¿Ï‡Î±ÏÏŒÏ€Î¿Ï…Î»Î¿Ï‚ speaking on the tv CHANNEL and the journalists Claus Î›Ï…ÏÎ¹Ï„Î¶Î® and Dimitris Oikonomou, among others, has pointed out:
Election K. Mitsotakis in the SOUTHWEST and the Democratic Coalition
Every election of a president in one of the major parties does not leave indifferent the political scene. We, however, deal systematically with the reconstruction of our own space, the space of the centre-left for the creation of a strong faction of social democracy. It is understood that this has nothing to do with what is being done in SW and the conservative party. The parties are ideological and programmatic origins and programmatic agenda, and ours is completely different from the programming agenda of the New Republic and mr Mitsotakis.
The HALL and when he was in government, had significant differences with the SW and the same and PASOK, who was trying to pass issues to the front, analysed and mrs. Gennimata in a recent interview. There is, however, a central difference with today. In 2012, the SW came out first party two times, and if there would be government cooperation with the SOUTHWEST, the country risked exiting the euro. On the contrary, now SYRIZA is that first party and ÏƒÏ…Î³ÎºÏ…Î²ÎµÏÎ½Î¬ with the party of Î»Î±Î¹ÎºÎ¯ÏƒÏ„Î¹ÎºÎ·Ï‚ right because he chooses it. This is a central difference, because we haven’t made any such choice . On the contrary, we want to “flip” the policies towards a progressive and reform direction.
Unemployment and insurance
SYRIZA is judged by the policies of the past 11 months, several of them can be classified as progressive. For example, has put forward a program to fight unemployment. We are against the reduction of pensions and increase contributions. I explained to mr. ÎšÎ±Ï„ÏÎ¿ÏÎ³ÎºÎ±Î»Î¿ that when you have the aim of reducing unemployment -in order to solve the insurance-, you can’t bring equivalent measures leading to the increase of unemployment and lead to a vicious cycle of recession.
If you agree with the employers that is another issue, as this measure will increase and duty evasion. The bill for the insurance is contrary to what was said by the prime minister for a reform that will protect the generations to come . So it’s a proposal for insurance which is non-reform and shifts in the next government the problem for 2018, but defer the bill on to future generations. Pay the broken those who have not retired. It is a change that does not constitute reform, financial nature that is looking for money from sources that will creep up the problem of the insurance. When we, however, come the final proposal will see the bill and will have to take a position responsibly. We have tabled our proposals with a lot of incisions and brave changes, several of the discussed and in the meetings with the Minister of Labour. We told him to come sooner in 15 years, in 2020, the law Î›Î¿Î²Î­ÏÎ´Î¿Ï… â€“ÎšÎ¿Ï…Ï„ÏÎ¿Ï…Î¼Î¬Î½Î·, we talked about specific ways to find sources of financing, pooling of funds in three (IKA, OAEE and OGA) because the combination of all-in-one will bring bigger problems for the management. When you increase unduly the contributions for income, for example, over 20,000 euro will be financially ineffective and socially unfair and will create disincentives.
For the next steps of the Democratic Î£Ï…Î¼Ï€Î±ÏÎ¬Ï„Î±Î¾Î·Ï‚
Our goal is to move even more quickly from here on out without delays in a wide-ranging conference programme for the clarification of our political position to a headlong rush without the rigidities of the past. The goal is the Democratic Coalition to be the vehicle for the new. The call concerns the place of social democracy, of the progressive centre and the reform, reformist left. From now on, the only enemy is inertia. We should be talking in terms of present and future.