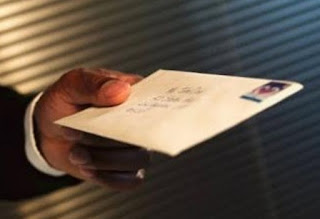 Dear tromaktiko,
for ten five days I waited by Great Britain a letter which…
and I received today 31/1/2017.
I am slightly surprised that the letter contained only an official state form of residence of a relative of my face in Great Britain, was torn and opened along the adhesive tape.
The last office to obtain this letter, Greece is stuck with ÏƒÎ¹Î»Î¿Ï„Î­ÏŠÏ€ the letter along the adhesive tape, which, of course, was missing, and after he wrote the letter that it was received by them torn and opened, secured on 31/1/2017 and placed in nylon bag the POST office closed with paperclips stapler.
And my question is:
From Great Britain to Greece, there is censorship?
Or a member of staff from the starting point up to the performance of the letter opened it, thinking that the letter will contain a certain amount of money?
Asking for explanations from relevant government agencies, to solve me the questions I asked.
Reader

You see injustice around you? He was SCARED of them… Send the complaint and the pictures of you on the tromaktiko! Is there a way to be heard… 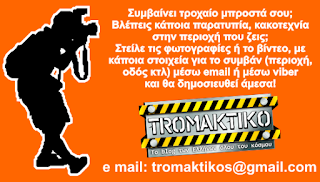 Wherever you are, whatever the time and if it is, and you see something wrong, odd, an accident or an emergency, open the camera of your mobile phone, get information about the event and send us material (photos or videos) at: tromaktikos@gmail.com or through viber, 6946 414328. Become a