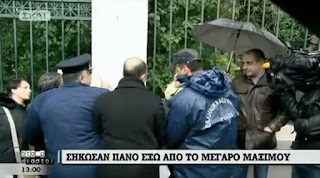 They tried to raise banners in protest…
for the closure of the Fund â€“ Not allowed by the cops and left
ÎœÎ¹ÎºÏÎ¿Î­Î½Ï„Î±ÏƒÎ· occurred outside the Maximos Mansion at noon on a Friday when insured persons of the NAT attempted to set up a banner outside the building, in response to the new pushed measures and the closure of the Fund.
The police did not allow the protesters to reach the point and protest, with the result that the protesters to leave in a calm tone.
The workers ended up in Herod Atticus after the course that had been in the centre of Athens, while since they took the banner back, they walked to the House where, as they said, will meet with representatives of parties.
Source