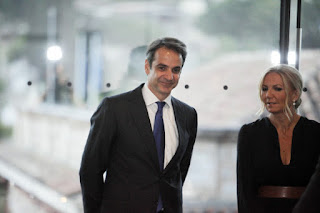 Without end continues the juxtaposition of government â€“ New Democracy on the occasion of the occupying of the ÎœÎ±ÏÎ­Î²Î±Ï‚ Kangaroo.
SYRIZA, in a statement calls on the president of the New Republic, to give publicity to the occupying of the same and of his wife.
The reason for the new announcement of SYRIZA was a new publication of the newspaper Documento. “Today’s publication of the newspaper Documento, which shows the wife of Mr. Mitsotakis, M. Î“ÎºÏÎ±Î¼Ï€ÏŒÏ†ÏƒÎºÎ¹, to hold offshore company constitutes an extra element that makes imperative the need to go public in the occupying of his wife, mr. Mitsotakis”, says in a statement, the SYRIZA with regard to the relevant publication.
SYRIZA points out that “the property of mr. Mitsotakis and his family does not constitute personal data” and stresses that “the head of the SW must, for legal and, particularly, for political reasons, to proceed as soon as possible in the disclosure of the total assets of both the own and of his wife”.
“The existence of a shadow for such a serious subject harms, ultimately, democracy itself,” notes the SYRIZA.