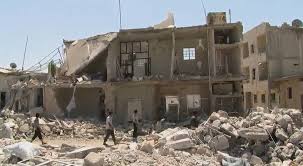 The syrian government condemned today…
featuring “blatant attack” on a raid carried out last night the international coalition under the united states, which caused the death of several Syrian military in the eastern part of the country.
“Syria strongly condemns the blatant attack on the forces of the coalition led by the united states. It is a blatant violation of the Charter of the UN”, which stresses the syrian Foreign ministry in a statement, in which he calls on the Security Council to take the necessary measures to avoid a recurrence of such incident.
Four aircraft of the coalition under the united states struck a camp of the armed forces of Syria in the province of Deir al Zor on Sunday, causing the death of three soldiers and the injury of 13, is added in this communication.
The aircraft of the allied forces fired nine missiles at the camp this Sunday night, it is also clarified in this communication to the syrian ministry of Foreign affairs.
This is the first incident of this kind referred to officially since the allied forces under the united states began carrying out air strikes against the Islamic State in Syria more than a year.
The Syrian Observatory for Human Rights had announced earlier that the fighter aircraft is likely to have belonged to the allied forces under the US struck camp of the syrian armed forces in Deir al Zor, killing four members of the syrian armed forces.
After the condemnation of the Damascus of the “attack” of this, the international coalition denied that it has hit last camp of the syrian army in Deir al-Zor, as announced by the syrian ministry of Foreign affairs and the Syrian Observatory.
“We are aware of the information published in the Press, but we we did not have any setback in this section of the Deir al Zor, but at a distance of 55 km from there,” he told the afp the spokesperson of the allied forces colonel Steve Warren.
Source