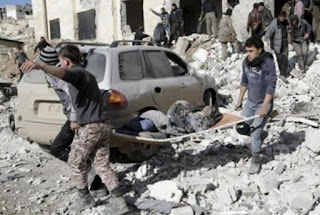 At least 57 people were killed in the city ÎœÎ±Î±ÏÎ¬Ï„ al Neumann, in the province of Idlib in Syria…
during this air raid that hit a court and the prison that was next to him, Î±Î½Î­Ï†ÏÎµ the Syrian Observatory for Human Rights.
The air raid on the city resulted in injuring many people, some of whom were hospitalized in critical condition, reports Reuters citing the Observatory.
Oldest account was for at least 39 dead.
“The toll rose to 57 dead, including a child and two women, 23 fighters of the Front al ÎÏŒÏƒÏÎ±, 6 rebs and 7 prisoners,” it said in a statement of the organization, whereas the number of dead is likely to increase as “30 of the wounded are in critical condition”.
Among the victims “is probably prisoners, prison guards, and maybe civilians because the building is located next to a popular market”, explained the director of the Observatory, Rami Î†Î¼Ï€Î½Ï„ÎµÎ» Rahman.
It is reported that the building was used as a prison from the Front Al ÎÏŒÏƒÏÎ± and that the blow was Russian.
The ÎœÎ±Î±ÏÎ­Ï„ al Noonan is a major town on the road linking Damascus with Aleppo. Controlled by the rebels by the end of 2012.
The Syrian Observatory for Human Rights announced that the Russian bombing in Syria, which began in late September, have caused the death 2.731 people, a third of whom are civilians.