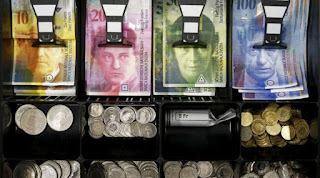 Very happy will be Christmas this year for a 15-year-old in Switzerland, who… five years ago he had found on the street a bill of 1,000 swiss francs and had given to the police, which was returned as not the sought one.
“He was very happy. At 15 you can do a lot of things with 1,000 francs,” said today Thomas Î’Î¯Î½ÎºÎµÎ»Î¼Î±Î½, director of public safety of the suburb ÎÏ„Î¹Î­Ï„Î¹ÎºÎ¿Î½ of Zurich.
The lucky teenager, who has not been named, was given back the same bill that he had found when he was 10 years old.
The swiss law provides that an asset that was lost in a public space belongs to the person who found it only after five years and not find one.
However, the valuables that are in the trams and trains belonging to the company management of railways, added the Î’Î¯Î½ÎºÎµÎ»Î¼Î±Î½.
“Today they bring us money once in a while, maybe 50 or 100 francs. But very rarely a note of 1,000 francs,” he concluded.