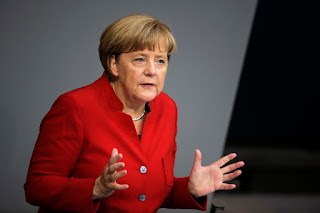 The eurozone must remain single, said today the chancellor of Germany Î†Î³ÎºÎµÎ»Î± Merkel, calling at the same time the member states of the single currency to meet their commitments…
“For me, there is no question of two-speed within the eurozone,” said Merkel. “The eurozone must remain uniform. And what we agreed should be done jointly by all the member states of the eurozone,” insisted the chancellor, re-a candidate of the christian Democrats and the Î§ÏÎ¹ÏƒÏ„Î¹Î±Î½Î¿ÎºÎ¿Î¹Î½Ï‰Î½Î¹ÏƒÏ„ÏŽÎ½ (CDU/CSU) for the office in the parliamentary elections of September.
German Finance minister Wolfgang Schaeuble said last Wednesday that if Greece does not fulfill its commitments in the framework of a programme to support the economy ought to leave the eurozone.
“The pressure on the Greeks to implement reforms must continue in order (the Greek economy) to become competitive, in a different case (the country) can’t stay in the monetary union”, supported by the Schauble speaking on the public television network ARD.