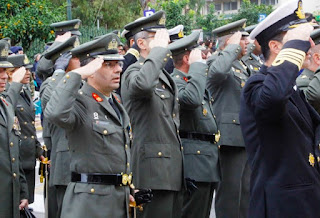 On 5 February decided to hold the nationwide protest police officers, firefighters and port workers, protest against the new insurance bill…
As stated in the announcement:
“Following the 22 January 2016 our communication, we inform you that took place today, 25 January 2016, a new meeting of the Race Committee of the Syndicate, in which it was decided to organise a massive, nationwide, Î­Î½ÏƒÏ„Î¿Î»Î·Ï‚ concentration of protest, the Square Kolokotronis (Old Parliament) in Athens, greece, on 5 February 2016, Friday, 16.00.
Also, it was decided that the presence of – our participation in the struggles that are already underway by farmers and other social classes.
We call on our colleagues in the energy and in retirement, to carry the racing our message to every corner of Greece, contributing to the successful organization of the event for our protest, which aims to prevent burdensome for the uniform planning of the Government and to the satisfaction Ï…Ï€ÎµÏÏŽÏÎ¹Î¼Ï‰Î½ requests for a more efficient functioning of the Security forces.
Not working middle ages!”.