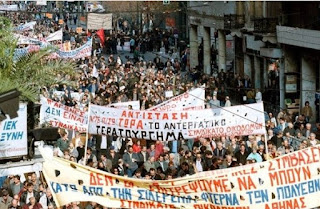 Week of strikes is the one that starts tomorrow with the various professional and social groups to react to the planned changes to the Insurance and the measures of the 3rd memorandum of…
General 24-hour strike for Thursday, February 4, generated by the GSEE, the Î‘Î”Î•Î”Î¥ÎºÎ±Î¹ organisations of professionals and scientists in response to the new Insurance. Closed will remain and pharmacies.
Handbrake for five hours â€“ from 11 in the morning till 16:00 in the afternoon-I’ll pull you next Tuesday 2 February, the workers in buses, trolleybuses, metro, electric railway and tram, as well as participating in a work stoppage of the union of employees of the Organisation of Urban Transport of Athens.
In a 24-hour strike will go ahead, and the journalists on Wednesday 3 February from 06:00 in the morning until the same hour the next day. The strike is declared in all the MEDIA, the public and the private body, the General Secretariat of Information and Communication and Press Offices.
Participation in the general strike of 4 February announced, and the pan-Hellenic Federation of Taxi and private hire.
New 48-hour strike by the Panhellenic Maritime Federation, next Thursday and Friday 4 and 5 February.
An extension of the nationwide abstention of lawyers until Monday 8 February, decided on by the Plenary of the presidents of the Bar Associations.
After a unanimous proposal of the coordinating committee of the notariats of the country decided the escalation of industrial action in the sector, and in particular the nationwide abstention to the notary from the exercise of their duties from tomorrow, Monday 1 February to Friday 5 February.
In addition from 1 to 3 February, the doctors refrain from e-prescribing. In the course of abstinence from the e-prescription the doctors will prescribe to a simple formulary. The doctors participating in the strike of 4 February.