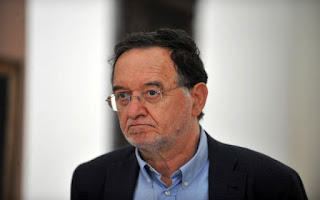 “Al. Tsipras remembered the Keratsini and Drapetsona two days before the… sale of the Port of Piraeus, just to sweeten the pill of this great national crime, for which he is responsible and that it does, will avoid to answer”, emphasizes the head of the Popular Unity Panagiotis Lafazanis commenting on the visit of prime minister in the morning at the site of the former fertilizer in Drapetsona.
In his statement, mr. Lafazanis noted: “The regeneration of fertilizers is not offered for political theater and cheap distractions”.
“The redevelopment of the area of Fertilizers is a matter of major social struggles and claims of the government, to whom as the minister responded, and I have tabled an amendment, against powerful interests and pressure to promote. This regeneration, which must be done and is an integral part of a plan for a public port of Piraeus, which will operate as a centre of development and culture, may not be the appropriate one and to use it for playing bad theater, for distractions and cheap distractions. In Keratsini and Drapetsona citizens will have life only if we stop the sellout of the Port of Piraeus and leave the COSCO and the Chinese interests that want to turn across the wider Piraiki Zone in China Î¤Î¿Ï‰Î· the working of the slave trade, and speculation”.