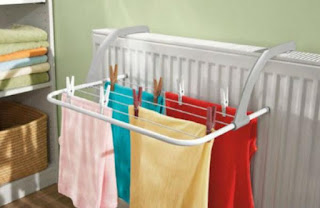 According to a survey carried out by the School of Architecture, Mackintosh in Scotland, the…
drying clothes inside the house poses a risk to your health.
In the investigation it turned out that many homes had too much moisture in indoor spaces. Up to a third of this moisture was attributed to the fact that during the autumn and winter months, many people choose to spread the freshly laundered clothes drying in the house with the windows closed due to rain/frost.
The researchers urge -through their research – manufacturers houses to provide designated areas in the house where residents will be able to spread their clothes without having health problems.
A study in 100 homes of Glasgow showed that 87% of residents spreading the clothes for drying indoors when it’s cold.
Drying laundry in the home: What happens to the dust mites
The head of the investigation, Rosalie Menon, said that the people are not aware of how much moisture is added to the air they breathe when they do that. Stated that only a â€œwasherâ€ (one dose wash) produces two liters of water in the atmosphere of the house when the clothes are dried inside it.
A total of 75% of homes had moisture levels, which favor greatly the development of the mites of the dust. There was also a strong correlation between the drying of the clothes and the spread of mold in many places of the house.
Drying clothes at home: What is the role of the mold
A special kind of seed mold, which is known to cause lung infections in people with weakened immune systems was found in 25% of the houses investigated.
The researchers want to see dedicated areas for drying to be created in every home. Otherwise, you will need at least the drying is done in a room with the door closed to the rest of the house and the window open to the outside.
Dr Menon said: â€œthese areas should normally have independent heating and ventilationâ€.