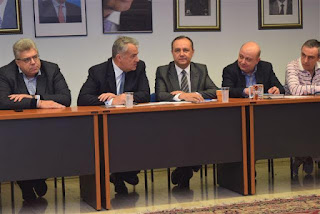 With the aim of restarting of the Ministry of Macedonia and Thrace, and the… transformation of the Ministry of Productive Reconstruction of Northern Greece met yesterday, for the first time, the Area of Macedonia and Thrace of the New Republic, after an invitation addressed to the members of the Section chief and a Member B of Thessaloniki, greece, mr. Theodoros Karaoglou.
The working meeting lasted about three hours, in the presence of the responsible Coordinator, EFC, public Administration, Public Order and Justice party, mr. Mavroudis (Makis) Voridis.
Common finding of all of the participants was that the members of the Sector must work with speed, efficiency, targeting, consistency and consultative spirit in the face of those who want Northern Greece mute. In this context, those who make up the voluntary working group will be divided into 8 thematic areas, the mission of which is to establish immediately a full plan of action of the Î¥ÎœÎ‘Î˜, which, if presented in detail to the President of the party mr. Kyriakos Mitsotakis, will be included in the alternative governance proposal prepared to present to the Greek citizens of the New Republic.
In this brief posting, mr. Karaoglou, as head of the Sector of Macedonia and Thrace was described as “representative” of the composition of the Sector and pointed out that “in this voluntary working group are putting time, thoughts and offer, in order to be ready the next day in the case that initiated rapid political developments”, noting that “we have before us an important task to perform, with a view to make the Î¥ÎœÎ‘Î˜ point of reference for administrative decentralization and production development”. Announced that similar meetings will be held in other regional sections of Northern Greece.
By the side of mr. Voridis, after congratulating mr. Karaoglou for the rapid, as he said, formation and start-up of the Area, unleashed harsh criticism of the Government, calling it “inept, obsessive, and destructive”.
At yesterday’s meeting, which was held in the Offices of the Executive Committee of Nea dimokratia in Thessaloniki, was also attended by the Chairman of the Board, mr. Minas Î£Î±Î¼Î±Î½Ï„Î¶Î¯Î´Î·Ï‚, the Special Adviser to mr Mitsotakis to the development of the themes of Macedonia mr. Antonis Oikonomou, the Director of the Board, mr. Zisis Î™Ï‰Î±ÎºÎµÎ¯Î¼Î¿Î²Î¹Ï„Ï‚ and the Secretary Organizational of New york.D. in Macedonia and Thrace, mr Theodoros ÎœÎ·Ï„ÏÎ¬ÎºÎ±Ï‚.