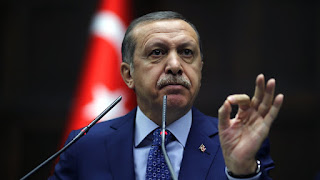 Zero hour in Syria, as well as the Russian Academy of Military Sciences…
for the forthcoming invasion of Turkey into Syria with 70,000 army, while the military plans drawn up to meet the superior in the region, Turkish land forces include the use of nuclear weapons!
Information that the Russian secret services report that in the event of military engagement of Turkey in the NATO will not have a joint line as well as five countries strongly disagree with the handling of the Anchor and are not prepared to cause a Third World War. According to professor Vladimir Prokhvatilov, Russia is targeting all the bases of the TEAK and the naval forces. The professor mentions that this is the only way to treat it is attainable as the Anchor has amassed 60.000 ÎºÎ±Ï„Î¬Î»Î»ÎµÏ‚ sources of 70.000 soldiers with hundreds of tanks and self-propelled guns.
In a state of war preparedness are all the bases of Russia while they have sent commands to the Russian forces that ÏƒÏ„Î±Î¸Î¼ÎµÏÎ½ in Ossetia, Armenia, Abkhazia. At the same time, Armenia has stated that in the next episode between Russia and Turkey closes the border, while sources from Syria report that made war preparations to tackle the Turkish troops. Of course, the intervention of Turkey is directly dependent on the path of the Kurds.
The Kurds of the YPG sweep in Afrin in northern Aleppo and captured the Ziyarah. The Ziyarah is to the north of Nubl and Zahraa, which have been freed by the syrian Army. At the same time create a “safety zone” around the canton of Afrin in northern Aleppo and accede to the military airport and Mennagh in the “heart” of the islamists and occupy the village of Al-â€˜Alqamiyah, after heavy clashes with the islamists of Harakat Ahrar Al-Sham and Jabhat Al-Shamiyah. To cope with the Kurds of the YPG and the syrian Army, the islamic party formed a coalition called “Jaysh Halab”, and consists of islamists of Harakat Ahrar Al-Sham, FSA, Jabhat Al-Shamiyah, Jaysh Al-Islam and Jaysh Al-Mujahiddeen.
The charge on occupy and the villages of Khuraybah and Shatal az Ziyarah and Dayr al-Jamal Before some officials of the YPG announced that its forces together with the forces SDF will take the town of Azaz and Jarablus to join the Efrin in northwestern Syria with the ÎšÎ¿Î¼Ï€Î±Î½Î¹ and Î§Î±ÏƒÎ¬ÎºÎ± in the east.
At the same time the Kurds have created five training camps in the villages of Assyrians to the river Khabur in the Î§Î±ÏƒÎ¬ÎºÎ±.
Turkey raising tons accuses Russia that has transferred chemical weapons to bases in Syria and in particular on the bases in Tartus, Daba, HÄ±meymin, Shairat. Depending on the course of the war would use it stresses the yenisafak.