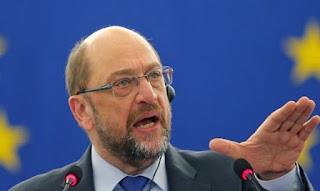 “The SPD resurrected…
from the dead. Martin Schultz can become chancellor. The mission is huge. Merkel leaves behind a divided country and a fragmented continent,” he writes in his article the well-known columnist and co-editor of the Spiegel, Jakob Î‘Î¿Ï…Î³ÎºÏƒÏ„Î¬Î¹Î½.
“With a all match: this (Martino-mania, the fatigue from the Merkel, the anger for the injustice, all these give the candidate chancellor the ability to surf on a big wave of excitement. And now, Schultz should be managed the feat to make like ÏƒÏ…Î³ÎºÏ…Î²ÎµÏÎ½Î¿ÏÏƒÎµ SPD constantly almost for the last 20 years.
Came the time. The Ãngela Merkel has failed. There is no doubt. Germany is as divided as ever over the last 40 years, and Europe is a fragmented continent”.
Martin Schultz has said: “Germany is not a fair country. Millions of people feel that this country is not fair”. Correct! This applies to Germany and beyond.
All over the world joined the forgotten of world capitalism to resist. The correct revolution, which gives this resistance a political voice, a voice of anger and prejudice. Merkel had nothing to counter it. For the phenomenon of injustice is not interesting. For the humiliation of the abandoned does not have the transducer. Schultz has both. It is strong, where Merkel is impossible.
Martin is a populist is? Let’s hope so! The word “populism” is not a pretty-sounding. Wrongly. Anyone who wants to make policy in favour of the citizens should to understand them and they him. Good policy needs good populism.
“Martin Schultz, as someone who dropped out of school, is a former drinker but as a man who succeeded in social development, aware of life as it really is for most people, that is difficult and painful.
If Martin Schulz to turn the SPD into a real social democratic party, may become the chancellor of the (social) unity. Merkel will remember this as the chancellor of the (social) division, concludes the article of Jakob Î‘Î¿Ï…Î³ÎºÏƒÏ„Î¬Î¹Î½.