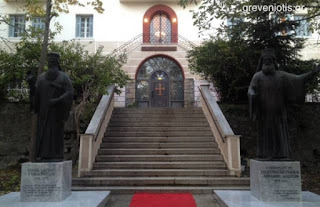 Arrested 39-year-old national, while it formed a relevant criminal case-file… at the expense of the other two nationals, a 39Ï‡ÏÎ¿Î½Î¿Ï… man and a 20-year-old woman
Officers of the Security Department of Grevena, in collaboration with policemen of the Division for Security of Larissa ÎµÎ¾Î¹Ï‡Î½Î¯Î±ÏƒÎ±Î½ fraud committed to the detriment of the Holy Metropolis of Grevena. For the case arrested 39-year-old national, while it formed a relevant criminal case-file at the expense of other two domestic, one 39Ï‡ÏÎ¿Î½Î¿Ï… man and a 20-year-old woman.
In particular, the day before yesterday morning, an unidentified man contacted the phone to the Metropolis of Grevena, on the ground that he is the director of bank premises and under the pretext of imminent “haircut” of deposits, offered to assist in the transfer of all money to the Metropolis of Grevena in a secure account, compared to the amount of twelve thousand (12.000) euros which would have to be paid with two (2) equal postal cheques.
The first postal order was received from a 39-year old in the area of Larissa, who was arrested by police Subdivision Security of Larissa and the amount collected was confiscated and will be given, while the second which would receive the 20-year-old, has been canceled.
The 20-year-old resident is being sought while the inquiry continues by the Security Department of Grevena.
ANNOUNCEMENT OF THE HOLY ÎœÎ—Î¤Î¡ÎŸÎ ÎŸÎ›Î•Î©Î£
On 9-2-2016 unknown person, Ï€ÏÎ¿Ï†Î±ÏƒÎ¹Î¶ÏŒÎ¼ÎµÎ½Î¿ store Manager Bank in order to ensure that the finances of the I. Metropolis from impending “haircut”, asked by an official of the Metropolis to pay money into personal accounts.
Straight away it became obvious that this is a fraud operation, was without delay to the Police Directorate of Grevena and the Security Department of Grevena and in cooperation with the Security Department, Larissa set up a business tracking and arrest of the gang and was arrested in Larissa, a person. In our information, the police is investigating the involvement of other persons in the case, while it was revealed that the mastermind of the gang is a prisoner in the prisons of Patras, greece.
THE I.M. Grevena wants to express its warm thanks to the Director of the Police Directorate of Grevena, and to the Commander of the Security Department of Grevena, who, acting systematically, methodically and exemplary managed the more successful outcome.
EC OF THE HOLY ÎœÎ—Î¤Î¡ÎŸÎ ÎŸÎ›Î•Î©Î£ OF GREVENA
Source